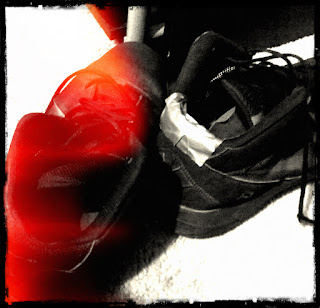 He takes a deep drag of his cigarette, and stares into the blinding desert sky. 112 degrees Fahrenheit, it takes a special kind of person.

He started running six months prior to this pointless moment of so-called self-improvement insanity. It is something more than physical fitness and health. Maybe health has something to do with it after he snuffs the cigarette out with the bottom of his shabby dad shoes, dirt poor, duct taped shoes.

He used to walk to work until the center of the sole would evaporate into a hole, after two weeks of stepping directly on rocks, he’d get a new pair and reset the process. He bought a pair for twenty dollars once, those lasted two weeks. The shitty shoes he carelessly plans to trot across the luxurious cracker-white bike path will hold up for now, but this sloppy mess will eventually need some multi-national brand running shoes. That is still quite a bit down the proverbial road though. His boat feet still require a “wide” size, a nice way of saying that he needs a fat shoe.

Honestly, the notion of this man’s feet running is an egregious proposition in the first place. They are a subject that unsettle the strongest of stomachs. He seriously has not put the cigarette out yet. He’s the kind of heifer that works up a sweat before the workout even begins.
Posted by Burning Empire Media at 9:31 PM