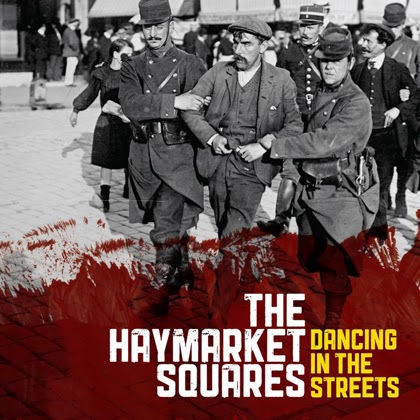 The Haymarket Squares may be the most punk rock local band that I have ever heard. Yet, their album Dancing in the Streets does not contain a single second of guitar distortion. This “punkgrass for the people” band uses choruses filled with harmony, a variety of strings (yep a mandolin is one of those instruments,) stand-up bass, a kazoo, whistling, drums, and a variety of angry, awe-inspiring lyrics to capture the essence of punk rock.

The Haymarket Squares use their music to tackle issues with passion and dedication and without coming off as contrived douche bags. Songs of discontent, social injustice, and contempt for the walls around all of us are what I personally love to hear stomping out of this stagnant desert.

I recently saw the Haymarket Squares for the first time and I wish that I had known their songs prior to seeing them live so that I could scream along like some sweaty raving lunatic fan boy that makes the band uncomfortable but all the while gives them the appreciation that they deserve. “I DON’T WANNA BE A BULLET CATCHER…”

Whether belting out songs of change in the middle of the crowd, an impromptu Anti-Arpaio protest, or a street corner jam, the Haymarket Squares are the type of band that arouses a strong urge to throw all of your pocket change and a dollar into their guitar cases while scoffing at the uninspired sad bastard playing out of tune and half drunk in front of the library. “No sir.”

These gentlemen are revolutionaries fighting the good fight against religious intolerance, Sheriff Joe, idiots in traffic, and the scourge of that evil marijuana stuff. Wait? Clearly, sarcasm is also one of their strong suits and for me it merely adds another notch of awesome to their already strong appeal. Dancing in the Streets has an intelligent anger that helps to validate my own pretentious asshole comments on stupid people and society as we know it. The best aspect of their album Dancing in the Streets is that listening to it would most likely cause a conservative to spontaneously combust.

Originally, I thought that I would easily grow tired of the Haymarket Squares’ particular sound. However, in retrospect I have no clue why I ever considered that a possibility. Despite the album’s release in 2010 Dancing in the Streets in my favorite local album of 2012. I’ve already listened to the album four times over and will continue repeating the album over until I can no longer stand them. Therein lies my pathetic excuse for a complaint and conclusion. Dancing in the Streets by the Haymarket Squares is too short, but that’s not much of a complaint, is it?