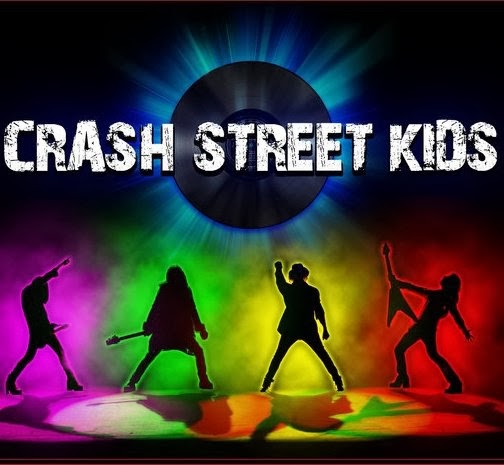 I am still somewhat new to YabYum, but there have already been a couple of times that I have wondered if what I am listening to is for real. Crash Street Kids immediately falls into this category. Not just in retrospect, but within the first two minutes of listening to their song “Sad Julia”. I honestly cannot get enough of this song, but I do not think that the sentiment is necessarily flattering.

I strongly suggest that anyone that is a fan of rock music, at very least, play this song, and sing along with lyrics like “Maybe if I scored some coke, if I stood on the corner with flowers and told dirty jokes, would you?…Ju-li-a.” The track is sure to turn any dragging party into a joy-filled evening that could only be topped by a drunken round of Twister. I know that I have single-handedly brought their ReverbNation rank up at least five spots with my own repeated plays.

Outside of my questions based on their level of seriousness, I have quite a bit of confusion concerning Crash Street Kids. Their name starts my confusions. Crash Street Kids is anything but “Kids.” Half of the band appears to be about 40 years old or more, and the music itself brings about visions of hundreds of plus 40s dancing as white people do giving each other thumbs up and winks while splashing plastic cups of draft all over each other. Trust me, if it were Huey Lewis and the News I’d be in the pit of madness pointing and snapping myself, but unfortunately we’re not even close to that page of music, let alone the same book.

I am also very confused by their song “Mary, Queen of the Rock.” A part of me wonders why they even bothered writing this song and did not opt for a safer bet of getting licensing to cover “Ballroom Blitz.” They clearly masked their intentions well enough to keep from receiving a cease and desist notice anytime soon, but I offer the statement as a means for improvement not finger pointing.

In all honesty, I have listened to the music, watched several videos, researched the history, and traveled deep into the depths of Crash Street Kids, but I genuinely cannot determine if this is some sort of Spinal Tap type joke on humanity or four gentlemen who take themselves way too seriously.

The song “Do You Still Believe in Rock n’ Roll?” nicely sums up Crash Street Kids for me. Under any other circumstances when asked the question my response would differ. However, when Crash Street Kids asks within the chorus I simply would prefer not to answer.