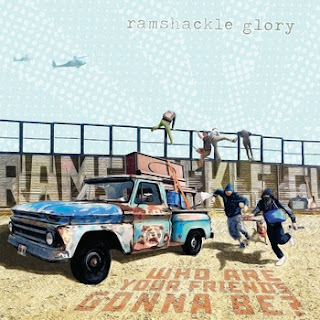 It took me several years to come to terms with the fact that as time moves forward I grow increasingly cynical and bitter toward the world around me. In other words, I’m like an old crotchety man sitting on his porch with a shotgun wailing wildly at the moon. Were there a soundtrack to compliment the disgusting taste in my mouth Ramshackle Glory’s, Who are your friends gonna be? would be it. Hailing from Tucson, these young men are the soy sauce to my sushi of punk rock angst.


While Ramshackle Glory promises the audience, “Punk rock with all the wrong instruments,” the sentiment could not be further from the truth. Who are your friends gonna be? may not be conventional punk rock, but the instrument selections and musical arrangements are just what punk rock needs.

The album not only provides a powerful punk rock symphony fused with a collection of slap-you-across-the-face true stories, but also a spectrum of emotion and a picture of the world that cannot be ignored.

Fuck Everything. I mean, “Fuck Everything” has to be my favorite song, and not simply because of the clever title. This song, like many others, covers a plethora of subject matters with foot stomping discontent, and ends in a tale of racist intolerance I know all too well.

While it’s not the direct subject matter, songs like, “Fuck Everything,” may be the key to burning a beautiful hole into the souls of right-wing Republicans everywhere.

Ramshackle Glory can be found somewhere between the intersections of Ween and D.I.Y. and Bob Dylan and anarchy. Regardless, of the musical awesomeness that the members of Ramshackle Glory possess, one of the most charming aspects of this group happens to be the clear and defined purpose, direction, and message of their songs as they too wail at audiences and the moon abroad.

This article was originally written & published for a different publication in September of 2012. Some grammatical corrections made. "Fuck Everything" was not really my favorite song. I just wanted an excuse to write 'fuck' three times in an article.
Posted by Burning Empire Media at 12:42 AM