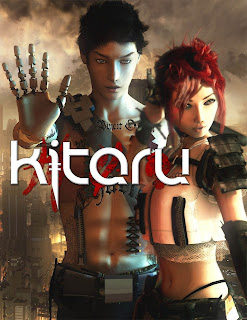 After years of exhaustive efforts, the award winning production company Aoineko Studios will soon release Kitaru: A fantasy world conceived by Aoineko owner Ben Steele. The pre-production of Kitaru’s story, film, and video game has taken over five years. Five years dedicated to creating an alternate universe and reality that stands out high above the crowd of innovation, design, and gaming.


The game takes on a traditional RPG format of gameplay set in Steele’s fantasy world, “unlike any other game” the industry has seen. Players will have the ability to utilize holographic world maps and character movements via touch screen interface. The sleek game controls allow an open and fluid range of movement, perfect for the ever-budding mobile platform of gaming.

The visuals of Kitaru are extremely stimulating, and the attention to detail causes mouth breathing stares of amazement. Steele adds a sense of depth to the alternate realities he creates that make a person feel as though they could jump into frame never to be seen by the likes of Earthlings again. After thousands of days and pages of development Steele also hopes to provide an accessible story, set apart from those which gamers have grown accustomed. The excitement is scheduled to begin in September when Aoineko Studios will release the highly ambitious and visually stunning video game for iPhone, Android, PC, and MAC.

If the already gargantuan workload of creating, designing, and developing a video game was not enough, Aoineko Studios will release Kitaru the film sometime after the game is published. The storyline of the film will continue where the game ends. Innovation and creativity does not stop at the boundaries of Kitaru’s game and film development. Aoineko plans on implementing a unique marketing innovation as a part of their business model for fund raising through Kickstarter. Aoineko Studios and the Kitaru Development Team plan to animate the contributors of large donations into the world of Kitaru. The characters will appear in both the video game and the film.

Aoineko and the Kitaru Development Team are a merry band of artists, coders, and all around bad ass nerds from Italy, the UK, Germany, United States, and, of course, Arizona. The previews of thing to come on YouTube and Kickstarter are spectacular accomplishments of animation and awe inspiring alternate realities created with meticulous detail. It will not come as a surprise when Kitaru goes viral.

This article was originally written & published for a different publication in May of 2012. A couple grammatical adjustments have been made, and September 2012 (release date) has long since past without a game release.
Posted by Burning Empire Media at 1:36 PM