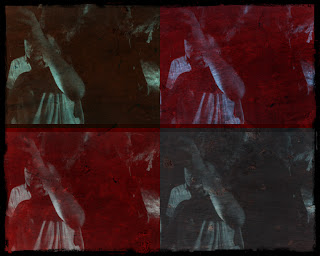 The chemist jumped out of his seat with an ominous growl. The bus driver struggled to keep his balance, "What the fuck?" The chemist quickly bit down into the driver's neck. Chewing the flesh, blood spurted several feet into the air, and the chemist slung the driver's body to the floor. Several passengers screamed into terror, as the driver's eyes went vacant and his body hit the floor with a lifeless thud. Blood pooled around the body. Every passenger was now aware of the situation, and they began mauling toward the exit like a European soccer riot. Tripping and falling on one another. "Get the fuck out of the way bitch." The chemist started for the closest passenger. "Someone please help me," a lady cried as she was shoved down to the ground. A middle aged severely obese man tripped on her body while attempting to get to the exit. An agonous shriek erupted when the weight of the man's body fell on the the lady. The snap of her leg breaking under his weight could be heard over the yelling. The lady continued to screech like a pussy in heat, and with greater intensity when she realized her fibula was staring back at her. The chemist grabbed at a young teenage boy whose headphones blaring The Death Crunchers only slowed his reaction time to the scenario. Now it was too late. The chemist quickly reeled the teenager toward him. "Please stop. Please, let me go," the teen said softly as he could feel the chemists fingers digging into his shoulder. The chemist, drooling, cocked his head slightly with a look exploration and confusion. The teen showed a moment's relief, but suddenly the chemist's teeth slammed down into the his face. Biting down, the chemist took of a section of the young man's cheek and nose. Blood seeped from the teen's injury. The chemist, chewing, drew back shortly. There way a moment of amazement in the teen's face before he began screaming bloody murder and the chemist took his second bite. 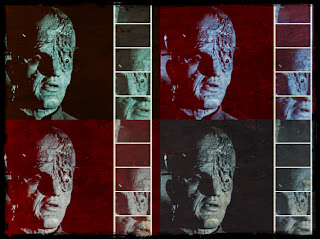 The fat man managed to get to his feet, and waddled off the bus while the lady continued to scream. While watching the chemist mangle the teen in terror, the lady attempted to army crawl toward the exit of the bus. "Oh lord, someone please help me. I need help." Meanwhile, the teen's screams subsided and he was laying on the ground staring up at the ceiling but not blinking. Hunched over the young man's body, the chemist continued to rip chunks of flesh from the body. All the while, tearing into the teen's stomach shoveling whatever he could into his mouth. The chemist stopped, and quickly darted his attention to the lady almost to the exit of the bus. They made eye contact. "No. No, no, no. Please don't." She tried to crawl faster, and the chemist got up from the teen's decimated body. The chemist less than ten feet away began hulking toward the lady, panting, and covered in blood. "Someone please fucking help me. Please." The protruding fibula caught the chemist's insatiable thirst for blood first. He sprang into the air, and locked onto the lady's leg when he landed. Simultaneously gnawing on both flesh and bone, the chemist's teeth crunching and lips smacking. Nerve endings squealed in the lady's brain, and stabbing pain instantly shot from her leg to her skull. The feeling that her temples may implode from each bite sharply pinging her brainstem made the lady forget for a moment. Shock set in, and she could see herself, see the chemist feverishly gnawing on her leg, tugging, teeth crunching, and lips smacking. The lady tried to plead one last time, raising one arm as through she was trying to reach out to the chemist. However, she could not speak, her vision blurred, and her arm fell back along her side in defeat.

(rough draft)
Posted by Burning Empire Media at 4:46 AM