Before he passed away Raferty's father became obsessed with conspiracy theories. The only one that he did not fall for was that nonsense about Kennedy. Raferty's father swore that he met Oswald and knew at first glance that he was crazy. Idiot. He was however scared to death of satellites. He would sit under the tin roof of the barn when reading the newspaper. He figured the metal of the barn would prevent the government from seeing the information he was taking in on a day to day basis. The month before Raferty's father died he spent most of his time cursing them for watching him. "The bastards are watching me. I don't know why goddammit but their watching me," he would yell at Raferty. Raferty would attempt to placate his father but there was not reasoning with him. He would snap at Raferty, "You don't think this shit doesn't concern you too boy. They're fucking watching you too. Probably cause of that refer you brought into the house." Raferty would sigh, "Daddy that was almost twenty years ago." His father would crack his cane on the ground, "I ain't no fucking idiot boy I know it's been in here since." It was true that Raferty had brought drugs into the house since his father found a joint in his sock drawer. However, many years had past since Raferty smoked that stuff. "I'm telling you they're only sending more of those damn things up there too. And you know why? To watch us," Raferty's father would keep the same exuberance of his screams, but when he would recite the words "watch us" he spoke in a whisper. "Daddy why don't you sit down a spell and watch some television. I'm sure there's a game on or somethin'," Raferty would try to ease his father to the couch by the shoulder. Calm for a moment. Raferty's father quickly spun around and cracked Raferty's forearm with his cane. The bone fracture was audible. Raferty screamed in terror, "You broke my arm daddy. You broke it." His father walked over to the couch and sat down slowly. "That'll teach ya to bring that refer into this house. You know Raferty you a sorry little faget. I always told your mother I'd of wished they accidentally switched you at the hospital or maybe they did." Raferty continued to howl. He started to cry. He would not have normally but the pain masked the real reason he was crying. "Why are you so cruel daddy? I was just trying to help you." Raferty's father turned on the television as if he did not hear Raferty's screaming. "Whatcha hollerin about boy?" Raferty cowered away in shock. "You're mean daddy. You're just down right mean."

Late in the evening of his father's funeral Raferty was sitting at The Purple Dish. The Purple Dish was Raferty's favorite bar when he was young. It was the only place he would take idiot women and dance and get drunk. Half conscious Raferty would swerve and weave the women out to the plantation in one of his Daddy's Buicks. He would press the gas to the floor. He loved to hear the women scream over the engine of the Buick. "You sure you're okay to be driving darling?" Raferty would smile and laugh in a hysterical cackle. "You think I could pay you another twenty to keep your mouth shut unless you're sucking?" Prostitutes have a knack for degradation so Raferty's question resulted in an anticlimactic silence. "Don't cramp up woman I'm just joshing you."  The prostitute's clear disappointment calmed Raferty's shit-eating grin. "Just watch the road sugar." Charming as always. 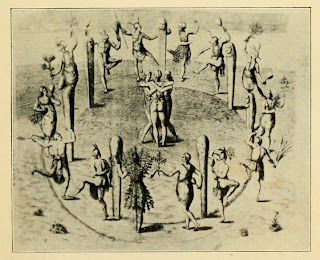 Raferty decided to celebrate his father's funeral with a prostitute. He had not been in the company of a woman for too long, but always kept the number for Max Schnelling. Schnelling specialized in the sexual needs sector of commerce. Raferty sat at the bar waiting on a "special girl." While Raferty was pleased that his father was dead, he knew he could use his father's death financially in more ways than the plantation. Raferty had yet to reach three hundred pounds but he was close and having difficulties sitting on the bar stool. He wished he would have known that they now have tables when he suggested The Purple Dish to Max. The old dance floor was now replaced with dining tables filled with food and Duke's Lizards cramming steak and potatoes down their throats. While storing beef and pork throughout his body, Raferty's face remained quite slender and made him look like a turkey with a head of a crow. His appearance inadvertently made him easy to pick out of a bar line-up. He was startled to the point of spilling his gin when the Special Girl tapped him on the shoulder. "What the fu..." Enchantment swept over Raferty in warm awe. This was a Special Girl. He knew things would be better when his father died but Special Girl was a free chicken dinner with a run of cards. "You Ralphy?" Rafery frowned, "It's Raferty." Raferty signaled the bar tender as Special Girl sat on the stool next to Raferty. Sore thumb is an understatement of the evening partnership's presence at the bar. The bartender approached glaring at Special Girl, "You can't be in here." Raferty attempted to stand but his thighs slammed into the bar. "What's your problem buddy?" The bartender would not budge, "Look man I know what's going on here. Your drink's on the house. The lady's got to go." Raferty was visibly angry as Special Girl laid her hand on his forearm, "It's fine honey I know a place." Raferty stood up staring down the bartender. "You folks have a good evening."
Special Girl and Raferty discussed pricing and decided to go to the plantation. Raferty was enamored and had no interest in social pleasantries. Raferty was so smitten that he could not recall the time between the tap on his shoulder and Special Girl sitting on his bed in a black bra and matching panties. It had been so long. "This whole plantation is yours?" Raferty was taking his shirt off and stood in suspenders and undershirt. "That's right darling the best peanuts in the world." Special Girl stood up and took off her bra. Raferty made deep and raspy moan. He unclasped his suspenders and his pants feel to the floor. "You're very beautiful." Special Girl stepped toward Raferty, "Thank you sugar." Special Girl slowly dipped her hand into Raferty's underwear. Raferty moaned again as Special Girl gently pulled Raferty's underwear down around his ankles. Special Girl gasped in disgust. Raferty was so overwhelmed that he forgot to make sure the lights were off. Three illuminated red sores on Raferty's penis and testicles revealed themselves to the world. The shiny specimen appeared as though someone had taken attempts at branding Raferty. Pus ridden sacks that would hatch thousands of baby spiders at any moment. Special Girl scampered back tearing for her clothes. "I'm sorry. I can't do this. I apologize. I will call Max to pick me up. Sweetie, you should have known." Raferty pulled up his pants in humiliation. He wished his father was there to crack him with his cane so that he could cry. "I really am sorry Ralphy." Raferty snapped his suspenders back into place. "It's Raferty. You fucking bitch. It's Raferty." Special Girl was frightened by Raferty's change of demeanor. "I'm really sorry. I would if I could." Raferty begins walking towards her slowly. "Maybe I could jerk you for another hundred but that's really more than I should." Special Girl backs up slowly as Raferty draws closer. "I'm sorry." Special Girl hits the wall. Raferty is so close Special Girl can feel his breath on her cheek. "The phone is down the hall." Relief quickly carried her out of the room. "Thank you." Raferty followed right behind her as she walked down the hall.

She suddenly stops and turns around, "You know you really are a sweet man." He stares at her panting slightly. Special Girl looks confused. In a blink, Raferty grabs her head and slams it into the hallway wall. Her body goes limp and falls to the ground. Raferty straddles her as she stares up at him with blood draining from the side of her head. He peers into the glimmer of consciousness remaining in her eye and drives a fist into her right cheek. The blow quietly seeps thick blood from her face. Raferty takes two hand fulls of her hair as her sight fades completely. He pulls her head from the floor and quickly smashes it back down. The sound of cracking skull silences the plantation.
Several hours later, Raferty stands on the porch  heaving for air as the moon light shines on beads of sweat gathered around his cheeks. He stares at a small plot of recently broken land about four feet deep. He walks back inside and crouches over the burlap wound bundle of human flesh that lays at the doorway. He begins dragging Special Girl and cringes as her head bounces off the five porch stairs. He takes a  breath and drags again.

It is not a traditional depth but it will do. Raferty heaves the special girl into the pit.

...The sun peers out over the horizon as Raferty finishes seeding. He packs the remaining soil into place, and stands with pride while brushing soil from his hands.

Raferty is now a tobacco farmer.


Posted by Burning Empire Media at 4:17 AM